US Food Banks Flooded by Endless Lines of People amid Pandemic

TEHRAN (defapress) – Thousands line up for hours at emergency food banks across the US every day as unemployment is skyrocketing amid the coronavirus pandemic.
News ID: 80788 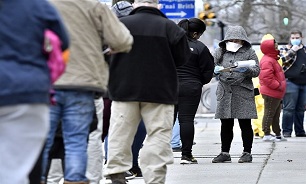 With the unemployment rate skyrocketing to 14.7 per cent this week - the highest since 1940 - and more than 16.8million people in the US filing for unemployment over the last three weeks, food banks have been struggling to keep up with unprecedented demand, the Daily Mail reported.

The growing pull on these emergency food pantries comes just as families across the country are heading into major religious holidays Passover and Easter.

On Saturday, Second Harvest Food Bank of Orange County hosted a drive-thru food distribution in Anaheim, California, meant to provide food to people most affected by the coronavirus pandemic.

The three-hour event was stocked with enough food for up to 7,000 families, with each car in the line being given a bag each of potatoes, onions, shelf-stable grocery data-x-items and King’s Hawaiian Bread.

People waited as long as two hours to receive their food packages. The Salvation Army said that it has given food to nearly 700 cars, with multiple families inside one car, indication that thousands of people had actually been given food.

These are just some of the latest reports of extensive lines of people in need of emergency food supplies following the coronavirus outbreak in the US.

Earlier in the week, dramatic images revealed long lines of cars at drive-thru food banks in many major US cities.

San Antonio Food Bank said that about 6,000 people had registered for its food distribution on Thursday, but that about 10,000 families actually showed up to receive more than one million pounds worth of food.

The parking lot at the drive-thru event - the organization's largest, single-day distribution in its 40-year history - was packed with cars as people waiting in long lines for hours for food.

It was a similar story in Pittsburgh on Friday, when The Greater Pittsburgh Community Food Bank's three-hour drive-thru distribution event.

Cars were lined up for more than a mile to receive two boxes of food - enough to make 40 meals - per vehicle. The organization had said that they had enough food to help 1,300 people at that giveaway.

At the Los Angeles Regional Food Bank's giveaway on Friday, hundreds of cars had lined up by 8am outside The Forum in Inglewood, California. Workers then put the groceries inside the trunks of their cars.

The organization said that it expected to give food to as many as 5,000 families that day.

At least 5,000 cars were expected at the event, according to LA Food Bank President and CEO Michael Flood - all being given to people who depended on the airport to make a living, ranging from taxi drivers to air crews, as passenger numbers have dropped dramatically due to stay at home precautions.

LAX's most recent figures show just 7,966 passengers flew or landed on March 31. The average number of travelers in January was more than 215,000 a day.

Feeding America - the largest hunger-relief organization in the country - told Good Morning America that it estimates it will need to feed an additional 17.1million people = many of who are relying on food banks for the first time - as a result of the coronavirus pandemic.

This, on top of the 37million people that were previously food insecure, including 11million children and 5.5million seniors.

'For the first time probably in our history, we’ve had to turn some people away,' she said, not that 'We don’t want to do that, ever.'

Food bank officials are now worried about running out of food due to fewer food donations, which leaves them in need of financial donations.

Officials at Anne Arundel County Food Bank in Crownsville, Maryland, reported that WBALTV that its donations were down 90 per cent, as grocery stores had reduced donations in efforts to meet the needs of their customers.

Central Texas Food Bank's CEO and president Derrick Chubbs said that the pantry, which serves 21 counties, had about 7,000 new families come through in March, alone.

'That's a 207% increase from what we're normally used to seeing, and I think that translates to approximately 22,000 new people,' he said.

'We've all seen the shelves. There isn't a lot of food being donated. The amount of donated food has dropped drastically, so we're already purchasing food,' Chubbs said.

'And to help us continue to purchase the food, we could certainly just use the financial donations.'