TEHRAN (defapress) – Iranian ambassador to Tajikistan Mohammad Taghi Saberi met and held talks with Minister of Culture of the Republic of Tajikistan Zulfiya Davlatzoda on the expansion of cultural cooperation.
News ID: 80805 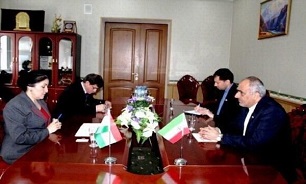 During the meeting with the Tajik minister of culture, Saberi expressed Iran’s readiness to develop relations with Tajikistan in all areas, especially in the field of culture.

There is a great potential for strengthening and developing cooperation between the two countries due to the commonalities between Iran and Tajikistan, he said.

Holding a cultural week, visiting cultural and artistic delegations to participate in book fairs of both sides, paying a visit to the cultural and historical centers of Iran and Tajikistan as well as holding joint exhibitions could be the areas of mutual cooperation, he added.

Stating that the Islamic Republic of Iran was the first country to recognize Tajikistan's independence in 1992, Zulfiya Davlatzoda, for her part, said that both sides have numerous cultural commonalities that could be effective in bilateral relations.

She also expressed hope that relations between the two countries would improve and develop in all fields, saying that her country is ready to broaden all-out ties with Iran, particularly in culture.