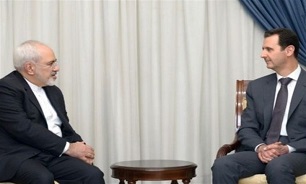 Spokesperson for the Ministry of Foreign Affairs of Iran Seyed Abbas Mousavi said Zarif will pay a visit to Damascus on Monday.

During the one-day trip, the top diplomat will hold meetings with Syrian President Bashar al-Assad and with his Syrian counterpart Walid Muallem, the spokesman said.

Zarif and the Syrian authorities are going to talk about the bilateral ties between Tehran and Damascus, regional developments, the latest political situation in Syria, and the Arab country’s fight against terrorism, he added.

Iran is a key ally of Syria as the Islamic Republic has been providing military advisory assistance to Damascus in its anti-terror campaign.

Iranian officials have made it clear that Tehran would stand by Syria in the reconstruction projects of the war-stricken country.