TEHRAN (defapress) – Globally, 2.4 million people have been diagnosed with the virus while more than 165,000 have died, according to data compiled by Johns Hopkins University.
News ID: 80847 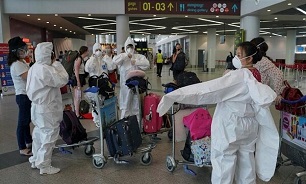 More than 40,000 people in the US have been killed by COVID-19 since the outbreak began, and more than 760,000 cases have been confirmed.

The number of deaths in Italy was the lowest in a week, while the pace of new infections also slowed. Spain registered its lowest daily death toll in almost a month.

The Korea Centers for Disease Control and Prevention (KCDC) has just given its latest update on the coronavirus. The KCDC reported 13 new cases - seven from overseas - on Monday, bringing the total to 10,674. It's the third day in a row where cases have been below 20, Yonhap news agency reported.