Hamas Spares No Effort in Combating COVID-19 in Gaza Strip

TEHRAN (defapress)- A high-ranking official with Hamas said the Palestinian resistance movement has made strenuous efforts at all possible levels to help the besieged Gaza Strip contain the spread of COVID-19 disease in the enclave.
News ID: 80857 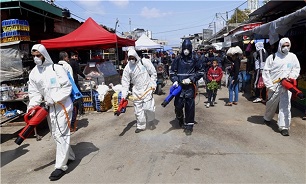 Khalil al-Hayya, a member of Hamas’ political bureau, made the remarks during an interview published on the movement’s official website on Sunday, saying meetings were held on a regular basis between Hamas and government representatives to take the most effective measures against the pandemic, presstv reported.

Elaborating on the role the resistance movement is playing in combating COVID-19, he noted that Hamas has already devoted its financial resources to win the battle against the highly contagious disease.

The movement has set up a 1,000-room field hospital in the Gaza Strip, and purchased 30 respirators and handed them to the government last week, Hayya said, stressing that Hamas has put all its charitable institutions, human forces and military resources at the disposal of authorities in Gaza to contain the pandemic.

“On the internal level, we in Hamas have abided by the government’s coronavirus-related instructions and halted most of our activities, sessions and meetings,” he said.

The COVID-19 disease, caused by a new coronavirus, was transmitted from wildlife to people in the Chinese city of Wuhan late last year. It has affected 210 countries and territories across the globe and has so far infected more than 2,386,000 people and killed over 165,000.

The World Health Organization (WHO) has declared the outbreak a global pandemic.

Official figures by Palestine’s Health Ministry show that as of Sunday, 431 people have tested positive for COVID-19 and two others have died so far. More than a dozen of the infected people are in the Gaza Strip, home to nearly two million people, and the rest are in the occupied West Bank.

The senior Hamas official also said that the movement had contacted a number of mediators and asked them to pressure the Israeli regime's authorities to allow medical supplies that are crucial in the war against COVID-19 into the Gaza Strip.

Hayya stressed that Tel Aviv was obliged to provide Gazans with the health supplies they need to fight the pandemic.

The impoverished enclave, under a tight Israeli-imposed land, air, and sea blockade since 2007, faces an alarming health situation. Its central medical laboratory announced earlier this month that it had run out of necessary supplies to administer COVID-19 tests.

The situation will definitely delay the necessary procedures for ending the isolation of hundreds of quarantined people who have already given samples for testing.

The majority of the population in Gaza live in densely-populated refugee camps where social distancing is not feasible, and the contagious disease can rampage the besieged sliver if necessary safety measures are not taken immediately.

In conclusion, the Hamas official said that the movement would spare no effort to ensure that the inhabitants of the blockaded sliver were safe from the pandemic, holding Israel fully responsible for the lives of Gazans.