TEHRAN (defapress) – Iran’s special envoy for Afghanistan has met and held talks with various Afghan officials and figures during the past days to facilitate the establishment of peace and stability in the neighboring country.
News ID: 80864 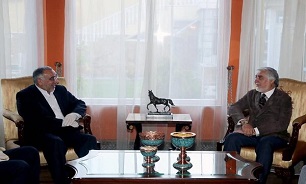 Meanwhile, in a meeting with UN Secretary-General's Deputy Special Representative for Afghanistan Ingrid Hayden on Monday, Taherian shared views on current developments in Afghanistan and its peace process and stressed the need for strengthening role of the UN in Afghan affairs, IRNA reported.

In a tweet on Monday night, Foreign Minister Zarif pointed to the talks, saying that Iran’s special envoy has “met with all sides in Kabul in past days”.

Meanwhile, Iranian Foreign Ministry Spokesman Abbas Mousavi said on Monday that Tehran backs formations of an ‘inclusive government’ in Afghanistan. “Iran’s all efforts are in line with helping establish an inclusive government in Afghanistan in a bid to bring peace and stability to the country, within the framework of respecting its nation and government's interests,” the spokesman said.