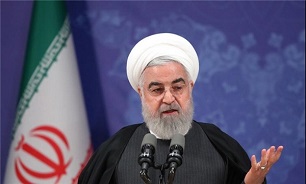 “Today you see that the US president invites people to anarchy,” Hassan Rouhani told a cabinet session in Tehran on Wednesday.

He said it was “rare in history” for a chief executive to resort to such behavior, and take a “nefarious” stance against his country’s legal governors.

Rouhani said, “It is essentially obvious that this country is in a complete disarray. They do not know how to address the issues of medical treatment and unemployment.”

The coronavirus COVID-19 is affecting approximately all countries and territories around the world. The virus was first reported in the central Chinese city of Wuhan late last year. It has so far killed more than 178,500 people and infected over 2.57 million others globally.