DM Rejects Claims of Iranian Vessels’ Harassment of US Warships 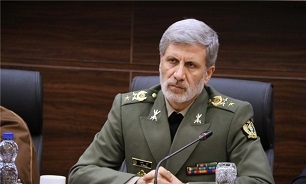 "What leads to insecurity in the Persian Gulf region is actually the illegal and aggressive presence of the Americans who have come from the other end of the world to our borders and make such baseless claims," General Hatami said.

Also, Iranian Foreign Minister Mohammad Javad Zarif slammed the US presence, reminding Washington that its forces are "7,000 miles away from its borders" following US uproar over an encounter with Iranian patrol boats.

“US Navy can’t seem to find its way around our waters... Or maybe it doesn't know what it's doing in our backyard, 7,000 miles from home,” Zarif said in a tweet originally published in 2018 and reshared on Thursday.

US President Donald Trump said Wednesday that he has instructed the US Navy to “shoot down and destroy” Iranian vessels if they harass American ships at sea.

The Islamic Revolution Guards Corps (IRGC) on Sunday strongly rejected the Pentagon's recent claims about the harassment of the US naval forces by the IRGC boats in the Persian Gulf as a "Hollywood" story, and further warned against the US Navy’s new “unprofessional and dangerous” moves in the waterway.