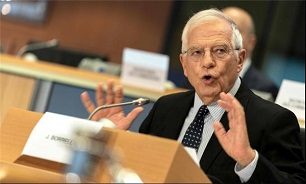 "We supported first to soften the sanctions and second, the request by Iran to the International Monetary Fund for financial help," Borrell said in a news conference after a video conference of EU foreign ministers on Wednesday.

"I regret that the Americans are, at this stage, opposing the International Monetary Fund from taking this decision. From a humanitarian point of view, this request should have been accepted," he added.

Late last week, Governor of the Central Bank of Iran (CBI) Abdolnaser Hemmati had urged the IMF to resist US pressures and approve his country’s application for financing to help curb the coronavirus.

“The last time I checked, it’s not the United States running the IMF, but its management and the board of governors who oversee the work and ensure that the IMF delivers on its mandate,” Hemmati said.

“We have lost so many lives, as the Americans and Europeans have lost,” Hemmati said, appealing directly to the IMF Chair and Managing director Kristalina Georgieva, “The time to act is now,” he added.

According to Hemmati, US sanctions and its decision to add the Iranian central bank to its list of “specially designated nationals and blocked persons” in September 2019 prevent Iran from accessing its own money, which would be “more than enough” to cover the 10 billion-euro shortfall.

In relevant remarks, on April 9, he said that the IMF should speed up the process to study Tehran’s request for an emergency loan to fight against the coronavirus, without being influenced by Washington’s opposition.

“We expect the IMF to immediately respond to the request of Iran which itself is a founding member of the Fund,” Hemmati wrote in a post on his Instagram page.

He added that the IMF is expected to consider Iran’s request for a $5 billion loan under its Rapid Financing Instrument (RFI), a mechanism which is available to all member countries facing an urgent balance of payments need.

The chief banker said he had sent a letter to IMF president on April 8 to emphasize the issue and to reiterate that Iran needs the funding to finance a current nationwide fight against the new coronavirus epidemic.

Hemmati expressed hope that the IMF would think about its position as a prestigious financial institution in the world and does not allow Washington to try to tarnish the image of the organization in the current “historic” situation.

That comes as reports in the media over the past weeks have suggested that the United States government is trying to hamper Iran’s efforts to get the emergency funding under the pretext that Tehran might use the funds to compensate the losses created as a result of the US sanctions.