TEHRAN (defapress) – Iran’s Foreign Ministry spokesperson dismissed the stances adopted by France and the UK on the launch of Iranian homegrown Noor satellite as a result of double standards and accepting the US’ bullying policies.
News ID: 80919 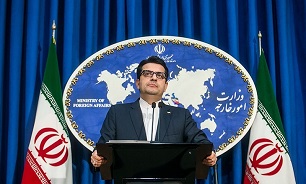 In a statement on Friday, Seyed Abbas Mousavi slammed as unacceptable the French and British stances on the launch of Iran’s Noor (light) satellite, saying, “Employing the space technology with peaceful purposes is part of the Islamic Republic of Iran’s defense program and scientific development, and no international treaty prohibits Iran from achieving and developing such a technology which has been gained through the efforts of Iranian experts and elites.”

He strongly dismissed the one-sided interpretation of the UN Security Council Resolution 2231 offered by France and the UK, stressing, “Under the fatwa (religious ruling) of the Supreme Leader and according to the International Atomic Energy Agency’s reports, Iran’s nuclear program pursues exclusively peaceful purposes; thus Iran’s space program which has defense objectives has not been designed for any other purposes.”

“While the US has been violating each and every clause of the United Nations Security Council Resolution 2231 every day and every moment by withdrawing from the JCPOA and imposing illegal sanctions against Iran, it is surprising that the European countries are not taking action against the US and refuse to condemn that country, and it reveals double standards and surrender to the US’ bullying behavior in the international arena,” Mousavi deplored, according to the Foreign Ministry’s official website.

“France and the UK are expressing concern about regional security while they themselves have a long record in creating tensions in the region and their destabilizing policies are a major obstacle to the return of security and stability to the region,” the Iranian spokesperson added.

The Islamic Revolution Guards Corps (IRGC) on Wednesday successfully put Noor (light) into orbit. The homegrown satellite was launched with a three-stage satellite carrier, dubbed Qassed (messenger), from a launch pad in Dasht-e Kavir, a large desert in central Iran.