TEHRAN (defapress)- A senior official in Iraq’s al-Anbar province warned of the increasing presence of the ISIL terrorists in the desert areas of the province which are controlled by the US forces.
News ID: 80923 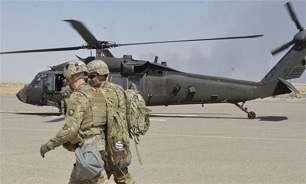 “These areas are controlled by the US military men and are a safe haven for the terrorists,” the official was quoted as saying by the Arabic-language al-Ma’aloumeh news agency on Saturday.

He added that the Americans supply the terrorists with their needs.

The official warned of the US attempts to transfer a large number of ISIL terrorists from Syria to al-Anbar and the bordering areas with Syria with the aim of fomenting tension and unrests in Iraq in the future.

In relevant remarks in March, another Iraqi official had also warned that the ISIL terrorists were being supported by the US in the Western deserts of al-Anbar along the border with Syria.

“The US is increasing its forces in al-Anbar and monitors the bordering line between Iraq and Syria,” Head of Badr Organization's Office in al-Anbar Qusai al-Anbari said.

He added that the US is attempting to transfer the largest-ever number of ISIL terrorists into Iraq, adding that the militants are supported by Washington in the desert areas of al-Anbar after arriving from Syria through US heliborne operations.

Al-Anbari warned that certain Iraqi sides are also attempting to facilitate the ISIL traffic into Iraq’s Western deserts in support of terrorism following a clandestine agreement with the Americans.