TEHRAN (defapress) – Secretary-General of the United Nations Antonio Guterres has expressed concerns over the ongoing crisis in Yemen, calling on the “relevant stakeholders” to exercise restraint and engage in an inclusive dialogue.
News ID: 80951 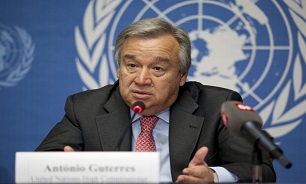 Stephane Dujarric, the spokesman for the UN Secretary-General, said Monday that Mr. Guterres was concerned about the developments in war-torn Yemen, and urged all “relevant stakeholders” to “exercise maximum restraint and refrain from any actions that would further escalate the situation”.

“The Secretary-General calls on all to engage in an inclusive dialogue to resolve their differences and address the legitimate concerns of all Yemenis, including those of southern groups,” Dujarric said.

The spokesman added that Mr. Guterres calls on the parties to conduct concentrated efforts on countering the spread of COVID-19, and responding to the flooding that has affected tens of thousands of Yemenis.

“The Secretary-General reaffirms the need to preserve the integrity of Yemeni institutions and emphasizes that the conflict in Yemen can only be resolved through a negotiated political settlement”.

They emphasized the need for reopening and ensuring the security of borders and ports in Yemen to deliver humanitarian aids to people, particularly at the time of the outbreak of the coronavirus.

Iran’s Foreign Ministry has welcomed the UN secretary-general’s call for a global halt in armed clashes amid the coronavirus outbreak, saying Tehran supports any initiative ending the war against people of Yemen and the blockade of the impoverished country.