TEHRAN (defapress) – US President Donald Trump is projecting that coronavirus deaths in the country could reach 70,000, but says original projections were much higher as he explained why voters should consider re-electing him in November.
News ID: 80953 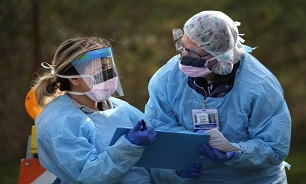 Trump has at times this month cited 60,000 as the estimate of how many people would die from COVID-19.

Trump was asked during a White House news conference on Monday whether an American president deserved to be re-elected after losing more Americans in six weeks than died in the Vietnam War.

Approximately 58,000 US troops were killed during the Vietnam War.

The number of dead in the US from COVID-19 surpassed 55,000, according to a tally by Johns Hopkins University.

Trump said the nation has lost a lot of people.

"But if you look at what original projections were - 2.2 million - we're probably heading to 60,000-70,000. It's far too many. One person is too many for this," he said, the Australian Associated Press reported.

"And I think we've made a lot of really good decisions. The big decision was closing the border or doing the ban, people coming in from China.

"I think we've done a great job. I will say this, one person is too many."

Trump is relying on a pandemic forecast that predicted 1.5 million to 2.2 million deaths in the US in a worst-case scenario, without efforts to slow the spread of the coronavirus through social distancing.