TEHRAN (defapress) – China supports Russia’s official position and believe that the existence of US biological laboratories in the territory of some former Soviet republics is fraught with risks, Chinese Foreign Ministry Spokesman Geng Shuang said on Wednesday.
News ID: 80958 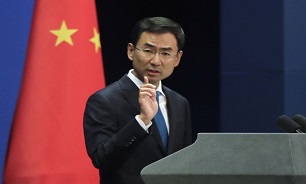 "We took note of the statement made by the Russian Foreign Ministry spokeswoman (Maria Zakharova on this score). The United States has created many laboratories in the territory of the former Soviet Union, which evokes serious public worries in the neighboring countries concerned," Geng told a news briefing, TASS reported.

"The local public has been insistently demanding these facilities should be closed down. We do hope that the American side will display a responsible attitude, take into account the official concern of the world community and make real steps to eliminate such fears."

The diplomat said Washington must pay special attention to issues that have a direct bearing on the health and well-being of the people in the countries where the US laboratories are located.

Zakharova told a news briefing on April 17 that US laboratories outside the United States might be developing pathogens of dangerous diseases.

She said the Russian foreign ministry had taken note of growing US biological presence outside the United States, in particular, in former Soviet republics. She added that Moscow could not afford to ignore the fact that infrastructures having dangerous biological potential were being set up by the United States near Russia’s borders.