TEHRAN (defapress)- Iranian Permanent Envoy to the UN Majid Takht-e Ravanchi described the US attempts to extend the arms sanctions against Iran as running against the UN resolution 2231.
News ID: 80965 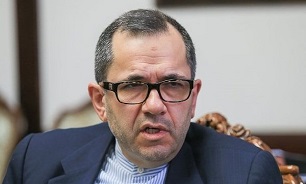 The claim that the United States is still a party to the agreement allowing it to invoke a sanctions snapback under certain pretexts is nothing but “an unprecedented joke”, Takht-e Ravanchi said on Wednesday.

“Security Council members should pay heed to the fact that any move to counter the lifting of Iran's arm embargo violates UNSC Resolution 2231,” he added.

He also reacted to reports that the US could still invoke a sanctions snapback because it is named as a deal participant in the 2015 UN resolution, calling it a “jest.”

He said the comments were stunning and unacceptable to the international community, citing the May 8, 2019 statement by the White House that explicitly said it had terminated US participation in the JCPOA.

Elsewhere in his remarks, the senior diplomat also reacted to Trump’s threats to hit Iranian vessels in the Persian Gulf.

“We are patrolling within the framework of international regulations in the Persian Gulf, which is close to our land and our waters, and we have maintained the security of this waterway for many years and will continue to do so,” he stressed.

Washington is reportedly planning to use a threat to trigger a return of all UN sanctions against Iran as leverage to get the 15-member Security Council to prolong the arms embargo on Tehran.