TEHRAN (defapress)- The deployment of its low-yield nuclear warheads by the United States is a dangerous step that leads to destabliziation, Russian Foreign Ministry’s official Spokeswoman Maria Zakharova said on Wednesday.
News ID: 80968 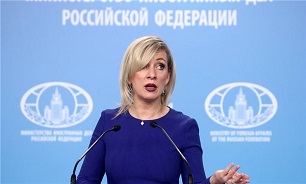 "We noted the article, published by the US Department of State’s official website on April 24 and devoted to the issue of creating W76-2 low-yield nuclear warheads and deploy it on some of its Trident submarines," she said, TASS reported.

"As we have already said may times, we view this as a dangerous step. We believe that it carries a certain element of destabilization," Zakharova said.

Russian Foreign Minister Sergey Lavrov earlier said the US production of W76-2 missiles lowers the nuclear threshold and increases the risk of a nuclear conflict.

According to US experts, the new missile has the explosive yield of 5-6 kilotons.