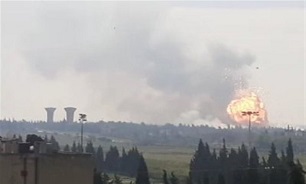 "One of the military facilities has come under attack in eastern Homs. The incident has led to explosions and caused plumes of black smoke...As a result, several passersby were injured [by the blasts]," Barazi said.​

The governor previously told another state channel that the depot belonged to the Syrian Army.

Hassan Al-Jundi, the health office director of Homs province, told SANA that at least 10 injured people were brought to the city hospitals following the explosions that occurred in a military site where they were provided with the necessary aid.

​No one has claimed responsibility for the attack so far.