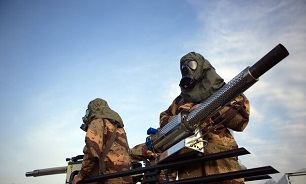 He made the remarks in separate letters to defense ministers of Iraq, Azerbaijan, Afghanistan, Pakistan, Oman, Qatar, Kuwait, Syria, and Lebanon.

Bagheri pointed to the Islamic Republic’s success against the outbreak and the key role of armed forces in this process.

He went on to say that failure to implement a correct and wise strategy against the disease can lead to an acceleration of its spread and posing threat to the nations. “Successful performance of the Islamic Republic of Iran in controlling the virus can offer solutions to other Islamic countries and friendly neighboring states,” reads part of the letter.

Iranian armed forces have been among the key players in the anti-corona fight. Different units of Army and IRGC have started missions across the country to disinfect streets and public places since the start of the outbreak, in addition to establishing workshops for producing protective gear required by ordinary people and medical staff.