most visited
world << world
US Think-Tank: 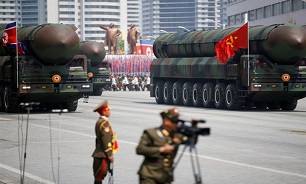 The Center for Strategic and International Studies (CSIS) cited commercial satellite imagery it says shows the facility and a nearby underground structure have the capacity to accommodate North Korea's largest intercontinental ballistic missiles (ICBMs) that experts believe are able to strike anywhere in the United States.

The facility has been under construction since 2016, and includes a number of notable features, including an unusually large covered rail terminal and buildings that are linked by drive-through access, according to the CSIS report, published on Tuesday. The facility is also relatively close to ballistic missile component manufacturing plants in the Pyongyang area.

"Taken as a whole, these characteristics suggest that this facility is likely designed to support ballistic missile operations," the report said, calling it the Sil-li Ballistic Missile Support Facility, Reuters reported.

The North Korean embassy in Beijing could not immediately be reached for comment on the report.

When asked about the report at a regular briefing in Seoul on Wednesday, a spokesman for South Korea's Unification Ministry said it would be inappropriate to comment.

Negotiations aimed at dismantling North Korea’s nuclear and missile programs have been at a standstill since working-level meetings with the United States collapsed last year.

In 2018, North Korea said it closed its Punggye-ri nuclear test site, and last year it offered to dismantle its Yongbyon nuclear complex in return for the revocation of five key UN resolutions during a failed summit between leader Kim Jong Un and US President Donald Trump in Vietnam.

But experts and US officials say in the absence of a denuclearization deal, North Korea has continued to expand its arsenal of nuclear weapons and ballistic missiles.

In recent months, North Korea has also warned it could rethink its self-imposed moratorium on nuclear weapons tests and ICBM launches.

"A high-bay building within the facility is large enough to accommodate an elevated Hwasong-15 intercontinental ballistic missile and, therefore, the entirety of North Korea’s known ballistic missile variants," the report said.

"The facility has been constructed next to an underground facility whose likely size is also large enough to easily accommodate all known North Korean ballistic missiles and their associated launchers and support vehicles."

The buildings are connected by a wide surfaced road network that could help move large trucks and ballistic missile launchers, the report said.

North and South Korea on Saturday exchanged gunfire around a rural guard post, raising tension a day after North Korean state media showed Kim visiting a factory, the first report of him making a public appearance since April 11.