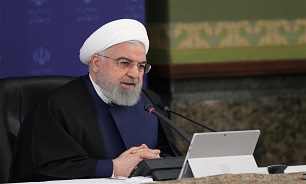 Our people have been under tough US sanctions and difficult conditions for the past three years, Rouhani said while inaugurating a number of industrial projects in the southeastern province of Kerman via video conference.

He added, however, that the “steadfastness and determination of our laborers, entrepreneurs, and farmers have prevented the enemies from reaching their goals”.

Washington re-imposed its sanctions on Iran in May 2018 after unilaterally withdrawing from the 2015 nuclear deal (also known as JCPOA) between Tehran and world powers that has been endorsed by the UN Security Council.

On Wednesday, Leader of the Islamic Revolution Ayatollah Seyed Ali Khamenei highlighted the significance of protecting the rights of laborers, calling on Iranian employers to take care of workers and their families.

On the occasion of Laborers Week and in line with the slogan of the year – “A Surge in Production”– Ayatollah Khamenei held a video conference with seven active manufacturers from different parts of the country on Wednesday.

In the video conference, managers and a number of exemplary laborers delivered reports on the status of production and about their achievements, issues and problems. They also put forward solutions and proposals for solving the existing problems and realizing the slogan of the year.

Ayatollah Khamenei stressed the need for protecting the natural rights of laborers, including a fair salary, regular pay without delays, and job security.