TEHRAN (defapress) - Hong Kong’s legislative council descended into extraordinary scenes on Friday, with opposing lawmakers throwing placards and scrambling over each other to take control of a house committee that has been unable to elect a new chairperson.
News ID: 81040 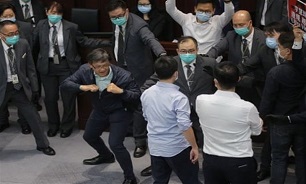 The scuffles began after an earlier meeting ended and legislators rushed to take the empty seat, more than an hour before the house committee session was due to start. The incumbent committee chair, Starry Lee, reached the seat first and was surrounded by security guards, Guardian reported.

A lawmaker and social activist, Eddie Chu Hoi-dick, physically attempted to climb a wall and go over the pro-Beijing crowd to reach the chair.

Chu was physically removed from the room by four security guards, each holding one limb. Others were shown to be dragged or knocked down, and pro-democracy legislator, Claudia Mo, who was standing away from the melee, appeared to be hit in the head by a flying placard.

The chaos related to recent gridlock over electing a chair of the committee so that it can move to passing legislation, some of it highly controversial.

Two bills were reportedly included in the government’s planned “urgent business” for the afternoon meeting.

One is a controversial bill to criminalise disrespect of the national anthem, while the other is the long-shelved article 23 national security laws which sparked mass protests in 2003 and which Beijing has recently called for the urgent reintroduction of.

Opposition groups have been filibustering for at least 15 consecutive meetings presided over by Dennis Kwok, preventing the election of a new chairperson and prompting an extraordinary statement from Beijing’s most senior offices in Hong Kong accusing them, and in particular Kwok, of misconduct.

Delays continued on Friday, with two pieces of conflicting legal advice presented claiming Starry Lee both could and could not deal with committee matters as incumbent chair while standing for re-election.

An earlier session of the committee insisted no business could be handled until there was a new chairperson installed. After taking the chair, Lee attempted to drive the meeting forward regardless.

Friday’s melee drew comparisons to similar scenes last year over Hong Kong’s proposed extradition bill which sparked months of mass protests, sometimes with millions on the street, which are expected to begin again as concern over the pandemic diminishes.

Physical clashes had been expected again, with the meeting organisers reportedly preparing an alternative room.