TEHRAN (defapress) – The Head of Iranshahr University of Medical Science says the navy vessel's personnel who were injured in a mishap on Sunday are now in stable health condition.
News ID: 81070 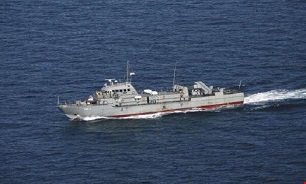 Mohammad-Mehran Amini noted that following an incident in southern Iranian waters on Sunday, led to the martyrdom and injury of a number of the members.

He added that the 15 injured personnel were immediately taken to Imam Ali Hospital of Chabahar, Sistan and Baluchestan province.

Two outpatients were examined and treated, and the remaining 13 were hospitalized, he said, adding that their general health condition is stable.

The Iranian Navy’s Kenarak logistics vessel was involved in an accident on Sunday afternoon in the perimeter of Iran’s southern Jask port, in the Hormozgan province.

The incident happened during Iranian Navy drills a day earlier.

The circumstances of the incident are currently undergoing technical examinations.