TEHRAN (defapress)- A tweet that was posted and then deleted by Saudi Arabia's Prison Authority, which falls under the kingdom's Interior Ministry, raised questions about the wellbeing of former Crown Prince Mohammed bin Nayef bin Abdul Aziz who is thought to have been detained since March.
News ID: 81074 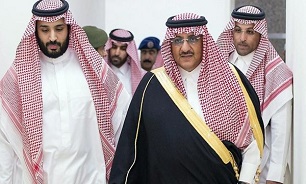 According to the now-deleted post, the senior prince and former minister of the interior had been transferred to intensive care after suffering a heart attack, Al-Jazeera reported.

The tweet, which was published in the early hours of Sunday morning, denied the death of the senior royal, adding that a specialised medical team was working around the clock to attend to him.

After the tweet was removed, the Prison Authority posted another tweet saying that the security of its account had been breached, suggesting that the first post about the former crown prince has been published by hackers.

Bin Nayef, a one-time successor to the Saudi throne and close ally of the United States, was reportedly arrested in March, in what analysts suspected was an attempt by MbS to consolidate his reign in advance of a potential handover.

According to a Wall Street Journal newspaper report at the time, the former crown prince was arrested over accusations of plotting a coup against King Salman and Mohammed bin Salman (MbS).

Sunday's series of tweets sparked controversy among Saudi activists, some of whom raised questions about the wellbeing the crown prince. Some stated that the posts may have been aimed to pave the way for the senior royal family member's death.

Meanwhile, an account called Prince Mohammed bin Nayef's adviser posted a series of tweets saying that the de-facto Saudi ruler MbS "wanted to see Mohammed bin Nayef dead as a result of medical negligence, but after news leaked to the family that the prince's health was deteriorating, MBS was forced to allow the medical team to treat him".

It added that bin Nayef's health has been deteriorating for more than a week.

Saudi activists and observers questioned the response from the Prison Authority, saying that if its account had been hacked, it would have been impossible to recover it so quickly.

Others believed that the account might have been hacked by people within the Prison Authority who felt loyal to the former crown prince.

Saudi activist Omar Abdulaziz questioned the timing and content of the deleted tweet, stating, "I wonder if a security breach or a prelude [to announcing the death of the former crown prince]."

Another Saudi activist, who calls himself Turkish Shalhoub, raised the same question.

"Is this to pave the way for getting rid of bin Nayef while in custody," he wrote on Twitter.

Named crown prince in April 2015 shortly after King Salman acceded to power, bin Nayef served in the position until his dismissal in a major reshuffle two years later that also saw him lose his job as minister of the interior, which he had held since 2012.

"I am content," he said at the time about his cousin MbS' promotion, adding, "I am going to rest now. May God help you."

Reports later announced that he had been placed under house arrest following his removal from office.