White House hosting worst US administration, Pompeo knows nothing about ABC's of politics

TEHRAN (defapress) – In his remarks during Wednesday Cabinet Meeting, Iranian President Hassan Rouhani said that the White House is hosting the worst American administration and the US Secretary of State Mike Pompeo does not know ABC's of politics.
News ID: 81094 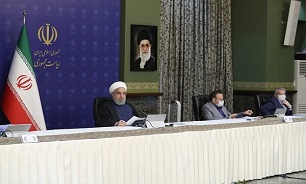 Rouhani named Trump administration a 'ruthless, inhuman and incompetent' one.

On May 10, the Iranian foreign ministry spokesman lambasted the administration of US President Donald Trump for incompetency in protecting its frontline nurses in the battle against COVID-19 pandemic.

"Same as other countries, Iran is dealing with the coronavirus pandemic but no country has not been under US sanctions more than two years," he said, "Iran is coping with the worst US administration."

"No US administration in history has been as ruthless, cruel, and incompetent as the incumbent one," he underlined.

"Pompeo is not even informed of the ABC's of politics," he noted, "In my view, this is the worst administration ruling the US."

"This was the first time in the history of the America that US officials assassinated a high ranking military commander and they did that to our IRGC commander," he said.

"Also, Trump administration is impeding imports of medical equipment to Iran amid the pandemic, this is unprecedented in history," he added.

Referring to some regional countries following the US inhumane policies, the Iranian President said, "Iran's southern neighbors are unique in history and we have not been familiar with such a father and a son in history", adding "Of course we have good neighbors, too."