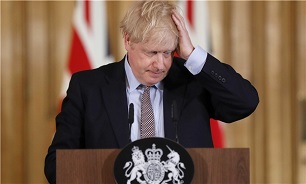 The charge came as the two men clashed at prime minister's questions in the House of Commons exactly a week after the Labour leader brandished a copy of the government's tables of international death tolls in a challenge to the prime minister's handling of the crisis, Independent reported.

Keir said it was "obvious" the government had stopped talking publicly about the figures because they showed the UK was in an "unenviable place".

But Johnson said it was “premature” to look at international death comparisons and said the Labour leader would have to “contain his impatience”.

Facing Johnson at PMQs, Keir said that the official death tally from COVID-19 released by the government now stood at 32,692.

And he added, “For many weeks, the government has compared the UK number against other countries.”

Holding up a print-out of a government chart, he told MPs, “Last week, I showed the prime minister his own slide showing that the UK now has the highest death toll in Europe and the second highest in the world.

“A version of this slide has been shown at the Downing Street press conference every day since 30 March - that’s seven weeks," he said, adding, “Yesterday, the government stopped publishing the international comparison and the slide is gone. Why?”

Johnson retorted, “The UK has been going through an unprecedented once-in-a-century epidemic, and he seeks to make comparisons with other countries, which I’m advised are premature because the correct and final way of making these comparisons will be when we have all the excess death totals for all the relevant countries."

“We do not yet have that data. I’m not going to try to pretend to the House that the figures when they are finally confirmed are anything other than stark and deeply, deeply horrifying. This has been an appalling epidemic," he added.

“What I can tell the House is that we are getting those numbers down, the number of deaths are coming down, the number of hospital admissions is down," Johnson said, adding, “As for the international comparisons he seeks to draw now, he will have to contain his impatience.”

Sir Keir said he was “baffled” by Johnson’s dismissal of the need for international COVID-19 death comparisons, given the government had done so for seven weeks with its press conference slides.

He told Prime Minister’s Questions, “The problem with the prime minister’s answer is it’s pretty obvious that for seven weeks when we weren’t the highest number in Europe they were used for comparison purposes, as soon as we hit that unenviable place they’ve been dropped.”

Keir quoted statistics expert Professor David Spiegelhalter, who last week rebuked the PM for claiming that he had argued against the use of international comparisons.

Spiegelhalter had insisted that the UK "should now use other countries to try and learn why our numbers are high", said the Labour leader, adding, "Dropping the comparisons means dropping the learning and that's the real risk."

But  Johnson said that “nothing could be further from the truth” than Keir’s suggestion that the UK was not learning from other countries, adding, “We’re watching intently what is happening in other countries and it is very notable that in some other countries where relaxations have been introduced that there’s signs of the R (the rate of reinfection) going up again – and that’s a very clear warning to us not to proceed too fast or too recklessly.”

Downing Street insisted the move to drop the comparison slide was based on expert advice - but failed to say why the decision had been taken at this stage.

The prime minister's official spokesman said, "Since introducing slides we have varied content and format. As we made clear in the slide, it is difficult to compare statistics across countries. countries report deaths in different ways so it is not possible to make like for like comparisons."

"Numerous experts have said that reliable international comparisons will not be possible until further along in the pandemic," the spokesman said.

The spokesman rejected accusations that the slide had been dropped because the UK was faring badly compared to other nations.