TEHRAN (defapress) – The US Central Command (CENTCOM) has reacted to the accident for an Iranian naval vessel in southern waters, which lead to the martyrdom and wounding of a number of Iranian sailors.
News ID: 81104 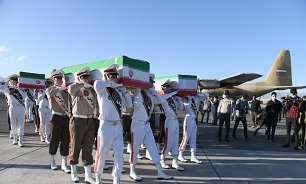 Captain Bill Urban, a spokesman for the US Central Command, offered condolences on Thursday to Iran over a friendly fire incident during a military exercise that led to the martyrdom and wounding of a number of its troops.

In a statement, Urban said, “Our sincere condolences to the Iranian people for the tragic loss of life.”

However, he further criticized Iran’s military exercise in its own waters, near the Strait of Hormuz, without mentioning the American terrorists' illegal presence in the region, thousands of kilometers from their borders.

His criticism comes while in a report in June 2019, the US Congress announced that more US troops die during training than in combat operation.

"Since 2006 ... a total of 16,652 active-duty personnel and mobilized reservists have died while serving in the US armed forces. Seventy-three percent of these casualties occurred under circumstances unrelated to war," the report states.

As many as 19 people were martyred and 15 others injured in an incident involving the Iranian Navy’s Konarak logistical vessel on Sunday, during a naval exercise near the waters lying close to Jask and Chabahar ports.