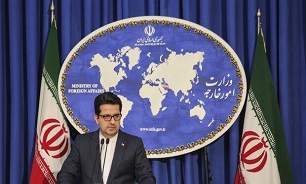 “Iran dismisses the recent American regime's #COVID19-related blame game & smears against China,” Mousavi tweeted on Friday. “The regime's campaigns aim at diverting attentions at home & abroad from the Admin's incompetency to save lives & reopen economy. Iran calls on independent states to stand against the US bullying.”

US officials have repeatedly leveled accusations against China for mismanaging the novel coronavirus outbreak and also claiming that the virus has been created in a lab in China’s Wuhan. Beijing has strongly rejected the accusations.

"We urge the US side to stop shifting the blame to China and turn to facts," said China's Foreign Ministry spokeswoman Hua Chunying at a press conference on May 07.

Her comments came just a day after Trump said the new coronavirus "is really the worst attack we've ever had" and that it is even "worse than Pearl Harbor" and "the World Trade Center."

Trump further said the COVID-19 pandemic "should have never happened" and that it could "have been stopped at the source … in China", accusing Beijing of mismanagement in containing the disease.

Tensions between Washington and Beijing have soared to a fever pitch in recent days and the two sides have traded barbs over the handling of the pandemic.

In response to Trump, the Chinese Foreign Ministry spokeswoman said the US might compare the current pandemic to "Pearl Harbor or 9/11, but the enemy facing the US is the novel coronavirus."

She also urged Washington to "fight side-by-side" with Beijing instead of fighting as "enemies."

"Lots of foreign countries, experts and scientists have all made positive comments on China's effective virus prevention and control," while "the US alone has made some very disharmonious, untruthful and insincere remarks," Hua said.

The COVID-19 disease, caused by a new coronavirus, was transmitted from wildlife to people in the Chinese city of Wuhan late last year. It has affected 212 countries and territories across the globe and infected more than 4,628,000 people and killed over 308,000 others so far.