TEHRAN (defapress)- No country discloses its defense secrets and Iran must not expose any military information to the enemies, a top military commander said, and underlined Iran's continued resistance against enemies' hostile moves.
News ID: 81124 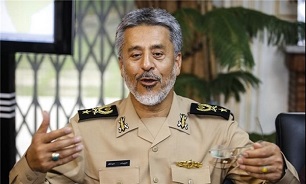 “No country reveals its defense secrets and we must not reveal military information and secrets to the enemy on our own,” Iranian Deputy Army Commander for Coordination Rear Admiral Habibollah Sayyari said on Saturday.

“The enemy is constantly trying to undermine the defense power of the Islamic Republic,” he said, adding, “but, the nation and Armed Forces are vigilant and will not give in to them.”

Sayyari made the remarks on Saturday while visiting the three Army personnel hospitalized due to the recent incident in the Sea of Oman.

“The Islamic Republic of Iran holds a military exercise every week on average on land, air, sea, and underwater in which real ammunition, missile, and equipment are applied. These mishaps are common in military and navy exercises around the world while there have been more bitter incidents,” he added.

Nineteen Iranian navy men were martyred and 15 others injured in a fatal incident for the Iranian Army Navy’s Konarak support vessel in the country’s waters near the Southern port of Jask in the Sea of Oman on May 10.

The incident happened during the Iranian Navy drills on Sunday, the public relations office of Bandar Abbas First Naval Zone of the Navy reported early on May 11.