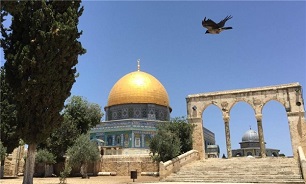 “Due to the current developments in the world, this year’s Quds Day will be a different one,” Mousavi said.

He added that as long as the Zionist regime continues occupation, aggression, cruelty and crimes against humanity the international Quds Day will be held and Iran will be the flag-bearer to this day.

In a relevant event on Saturday, the Iranian parliament’s National Security and Foreign Policy Commission in a meeting on Saturday prepared and approved a bill to confront the hostile acts of the Zionist regime against peace and security.

“Based on the first article of the plan, all Iranian bodies are required to use the country’s regional and international capacities to confront the Zionist regime’s measures, specially its warmongering and terrorist moves, siege (of Gaza), settlement construction, displacing the Palestinian people and occupation of countries’ lands, including Golan,” Rapporteur of the parliament’s National Security and Foreign Policy Commission Seyed Hossein Naqavi Hosseini told FNA on Saturday.

Naqavi Hosseini said that based on the approval, any cooperation or spying for the Zionist regime is equal to enmity towards God and corruption on earth and activities of the Israeli software platforms in Iran and using its hardware and software products is forbidden.

He noted that another article of the plan requires the foreign ministry to pursue the referendum in the Palestinian territories which has been registered at the UN too.

The plan was approved on the eve of the International Quds Day on May 22.