TEHRAN (defapress)- The support rate for Japanese Prime Minister Shinzo Abe slipped to its lowest level in two years with respondents displeased over his virus management and for pushing a bill that critics say gives him greater power to pick senior prosecutors.
News ID: 81138 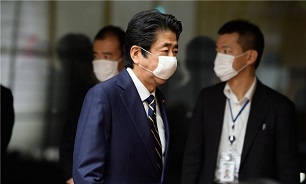 A survey taken over the weekend and released Monday by the Asahi newspaper showed Abe’s support rate fell 8 percentage points from nearly a month ago to 33%, the lowest since 2018 when he was facing allegations of cronyism that rattled confidence in his government.

The Asahi newspaper survey said a driving factor for the recent fall has been a bill proposed by Abe’s government that would raise the retirement age for some senior prosecutors by two years to 65 --- a plan that about two thirds of respondents said they didn’t support.

Japanese media including the Asahi newspaper have reported that the legislation could allow a perceived Abe ally secure promotion as one of the country’s top prosecutors in the coming months.

The Abe government earlier this year let Hiromu Kurokawa stay on as chief of the Tokyo High Public Prosecutors Office after he turned 63, potentially setting him up for a move into the more powerful post of prosecutor general.

Critics contend the bill could allow Abe to retain prosecutors friendly to the government and has caused a massive public backlash with about five million people --- including celebrities --- joining a social media campaign against the proposal.

Due to the unpopularity of the measure, the government and ruling parties were looking to drop the bill, Kyodo News reported Monday, citing senior officials.

Chief Government Spokesman Yoshihide Suga told reporters that he was aware of the various opinions about the bill and parliament would decide on a schedule for deliberations.

Abe is the country’s longest serving prime minister and facing one of the most difficult periods during this current run at the helm that started more than seven years ago. The public has seen his government as slow and out of touch in its pandemic response, surveys have showed, and the virus has shaken the finances of households and businesses.

The world’s third-largest economy sank last quarter into a recession, data Monday from Japan’s cabinet office showed. The situation is likely to deepen further as households limit spending to essentials and companies cut back on investment, production and hiring to stay afloat amid the coronavirus pandemic. Analysts see a 21.5% contraction this quarter, a record for official data going back to 1955.

While the polls are a blow for Abe, he is unlikely to face any immediate threat as opposition parties have failed to attract voters and have support rates in the single digits. Abe must hold elections for the powerful lower house of parliament by the autumn of 2021.

Despite the backlash over virus management, Japan has seen the fewest confirmed COVID-19 infections and deaths of any Group of Seven leading democracy. Last week, Abe removed 39 of the country’s 47 prefectures earlier than scheduled from a state of emergency, as infection cases have waned.