TEHRAN (defapress) – Iran has called on the World Health Organization (WHO) to push for the removal of the “cruel sanctions” that have impaired the ability of nations to deal with the coronavirus outbreak, Health Minister Saeed Namaki said.
News ID: 81144 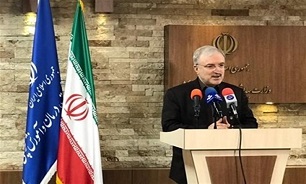 In comments on Monday, Namaki expounded on the topics discussed in a recent online meeting he held with his counterparts from the WHO member states, saying he called on the WHO to intervene to lift the cruel sanctions against Iran and other nations that have hindered the acquisition of medicine and vaccine amid the outbreak of the coronavirus.

Namaki also noted that he highlighted Iran’s fair medical services in the videoconference, saying the Islamic Republic has provided free treatment for all people after the COVID-19 outbreak, even for foreign refugees.

The minister further noted that Iran has voiced support for the WHO as an organization that is connecting nations in the war on the coronavirus.

“We condemned the American move to weaken the World Health Organization, which happened for the first time,” he added.

US President Donald Trump has suspended the WHO funding over what he called the UN body’s “mismanagement” of the new coronavirus pandemic, in a move that has drawn widespread international condemnation.

The US president has repeatedly accused the WHO of siding with China and reliance on Chinese data, blaming it for “all sorts of false information about transmission and mortality” that was circulated amid initial reports.

The US contributed $400 million to the WHO last year, roughly 15% of its budget.