TEHRAN (defapress) – Israeli troops shot and wounded a Syrian shepherd near the border with Lebanon under the pretext that the shepherd had crossed the border into the occupied territories.
News ID: 81145 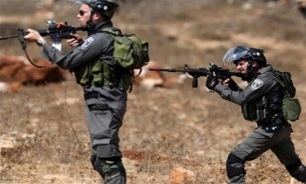 The Lebanese satellite television station al-Manar reported that the Israeli forces opened fire on the Syrian shepherd working on a farm in the Kfarchouba Hills area, which is on the Lebanese side of the UN-drawn Blue Line.

"A short while ago... troops spotted a suspect who crossed the Blue Line from Lebanon” into Israel, the military said in a statement, Press TV reported.

"The suspect was injured from fire and is being evacuated to a hospital … in Israel," it added.

Lebanon said it was following up on the incident in coordination with the UN peacekeepers who patrol the Blue Line. The United Nations marked out the line between Lebanon and Israel in 2000.

Israel and Lebanon are technically at war.

Lebanon's government, the Hezbollah resistance movement and the UN Interim Force in Lebanon (UNIFIL) have repeatedly condemned the overflights, saying they are in clear violation of UN Resolution 1701 and the country's sovereignty.

UN Security Council Resolution 1701, which brokered a ceasefire in the war of aggression Israel launched against Lebanon in 2006, calls on Tel Aviv to respect Beirut's sovereignty and territorial integrity.

In the occupied territories, an Israeli court convicted a Jewish settler of racially motivated murder in a 2015 arson attack that claimed the lives of a Palestinian couple and their baby in the occupied West Bank.

On July 31, 2015, a large fire broke out after settlers threw firebombs and Molotov cocktails into two Palestinian houses in the town of Duma, located 25 km southeast of Nablus, setting them ablaze while their inhabitants were asleep.

The arson attack killed 18-month-old baby, Ali Dawabsheh, and critically wounded his father and mother, Sa’ad and Riham, who later succumbed to their injuries.

The triple conviction of Amiram Ben-Uliel, 25, can result in a potential life prison sentence. He has argued that Israeli investigators obtained false confessions from him under duress.

Ben-Uliel would appeal the verdict at Israel's supreme court, his lawyer said.

Israeli settlers have in recent years carried out various attacks on Palestinian property in the occupied West Bank and Jerusalem (al-Quds) under the “price tag” slogan.

Price tag attacks are acts of vandalism and violence against Palestinians and their property as well as Muslim holy sites.