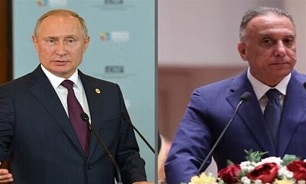 Putin and al-Kadhimi gave a positive assessment to the agreements on oil output cuts reached with the participation of Russia and Iraq in the OPEC+ format, which are aimed at overcoming the acute phase of the oil crisis, the statement said, Xinhua reported on Monday.

They stressed the importance of continuing effective joint efforts in this direction, it said.

While discussing the situation in Syria, Putin and al-Kadhimi agreed to further coordinate steps to ensure a long-term normalization of the situation in the war-torn Middle East country and restoration of its sovereignty and territorial integrity.

The two leaders discussed issues concerning bilateral cooperation in trade, the economy and energy and expressed the wish to further develop the traditionally friendly ties between their countries, the statement said.

Putin congratulated al-Kadhimi on assuming his office earlier this month, and the Iraqi people on the occasion of the Muslim holiday of Eid al-Fitr.

Putin and al-Kadhimi agreed to continue the bilateral contacts at various levels, the statement said.