(defapress) – US civil rights groups are suing Donald Trump as well as some other federal officials over the assault on peaceful protesters near the White House on Monday, to allow the US president to hold a photo op at a historic church.
News ID: 81246 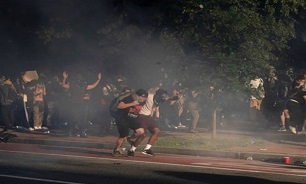 According to a release from the ACLU of the District of Columbia, the lawsuit filed on behalf of Black Lives Matter DC and individual protesters accuses Trump and the other officials are accused of “violating their constitutional rights and engaging in an unlawful conspiracy to violate those rights”.

Protesters demonstrating over the killing of George Floyd in police custody in Minneapolis were gassed, shot with rubber bullets and forcefully cleared on Barr’s orders so Trump could walk to St John’s church, the so-called Church of the Presidents, and hold up a Bible in a photo op meant to reassure evangelical supporters.“What happened to our members Monday evening, here in the nation’s capital, was an affront to all our rights,” April Goggans of Black Lives Matter DC, the lead plaintiff in the case, said in a quote provided by the ACLU.

“The death of George Floyd and Breonna Taylor at the hands of police officers has reignited the rage, pain and deep sadness our community has suffered for generations. We won’t be silenced by teargas and rubber bullets. Now is our time to be heard.”

The lawsuit, filed in federal court on Washington, comes as William Barr, the attorney general, defended the decision to forcefully remove the peaceful protesters, saying it was necessary to protect officers and federal property.

Scott Michaelman, the legal director for the ACLU of the District of Columbia, said: “The president’s shameless, unconstitutional, unprovoked and frankly criminal attack on protesters because he disagreed with their views shakes the foundation of our nation’s constitutional order.

“And when the nation’s top law enforcement officer becomes complicit in the tactics of an autocrat, it chills protected speech for all of us.”

The events in and around Lafayette Square on Monday night have contributed to a growing rift in US society and even within the US military. Trump was accompanied to the church by officials including Mark Esper, the secretary of defense, and Gen Mark Milley, the chair of the joint chiefs of staff.

After the crowd was dispersed, Trump, followed by an entourage of his most senior aides – including Barr – along with Secret Service agents and reporters, walked over to St John’s Church, the landmark pale-yellow building where every president, including Trump, has prayed, that had been damaged Sunday night in a protest fire. Barr said Trump, as the nation’s chief executive, had every right to do so and claimed it wasn’t political.

US Park Police launched an investigation after officers were seen hitting an Australian journalist with a shield as they cleared the protesters.

For days, the federal government has vowed to have an aggressive response in the District of Columbia after nights of violence that led to fires being set, windows shattered, store shelves emptied and dozens of police officers injured. The federal government has deployed law enforcement officials from numerous agencies, and national guard troops from a number of states have been sent to the District of Columbia.