TEHRAN (defapress) – A Florida police department launched an internal investigation after a video surfaced on social media showing a Sarasota police officer kneeling on a black man's neck during an arrest.
News ID: 81251 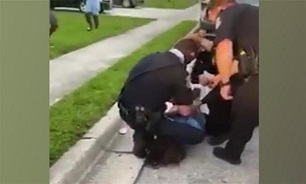 The Sarasota Police Department said in a statement released Tuesday it didn't learn about the video until Monday when the department was tagged in a social media post showing a portion of the arrest. After a review of several videos, Chief Bernadette DiPino immediately initiated a formal internal affairs investigation, the department said.

The officer, who had not been identified, has been placed on administrative leave.

SPD did not address whether the other two officers on scene, and shown in the video, would face any disciplinary action.

SPD also released an unedited video taken from the Sarasota County Sheriff's Office helicopter on the day of the arrest. The 13-minute video provides a bird's eye view of officers responding to the scene and taking the man into custody.

Police also stated in the incident report that Carroll was resisting arrest.

However, during the interview with CNN affiliate WFTS, Carroll says he was not resisting. He says he was attempting to move around so that he could have "circulation in his body and throat."

CNN has reached out to the International Union of Police Association for comment.

Massive Anti-racism protests sparked by the death of George Floyd in Minneapolis after a police officer kneeled on his neck for nearly nine minutes during an arrest.

Protests against police brutality and racism arose after Floyd’s death, before a crackdown by federal and state authorities led to the worst civil unrest in the US since the assassination of Martin Luther King Jr in 1968.

Curfews remain in place in most major US cities, dampening the potential for confrontation between protesters and police in the hours of darkness. On Tuesday, many marchers defied the deadline.

Police forces have been criticized for their heavy-handed response to protests, and several people have died since the unrest began.