TEHRAN (defapress) – Iran’s Ambassador to the United Nations Majid Takht Ravanchi slammed the US for attempting to extend the UN Security Council’s arms embargo on Tehran, saying that Washington has no right to do this under Resolution 2231.
News ID: 81264 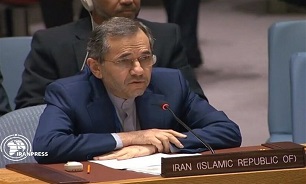 “@USAmbUN believes US retains right to initiate snapback of sanctions under UNSCR 2231. WRONG: US cannot be a JCPOA “Participant”, since @realDonaldTrump ceased US participation. The US—which is in violation of the resolution—has no right to initiate anything under 2231,” Takht Ravanchi said in a tweet on Saturday.

Under Resolution 2231, the arms embargo on Iran will be lifted in October 2020; however, the US says it will use a range of options to prevent this and use a Security Council provision to block the expiration of ban.

While the US is no longer a party to the JCPOA, it recently launched a campaign to renew the Iran arms ban — in place since 2006/2007 -- through a resolution at the Security Council, but Russia and China are most likely to veto it.

On Friday, US Ambassador to the UN Kelly Craft announced that Washington had shared the draft resolution on the extension of Iran’s arms embargo with Russia, Britain, France, Germany and Estonia which are all members of the Security Council.