TEHRAN (defapress)- Tehran’s municipality issued a call on Monday for artists across the world to take part in designing a statue of the martyred Commander of Islamic Revolution Guards Corps, Lieutenant General Qassem Soleimani.
News ID: 81285 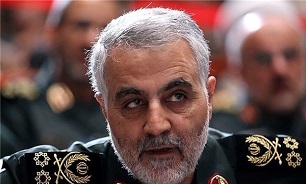 Sculptors in Iran and around the world have been called to participate in the international contest to create the statue of General Qassem Soleimani who was martyred by the US terrorist army on January 3 in Baghdad.

Sculptors can send their works to farakhnart@gmail.com until July 5. The selected work would be erected in a location in Tehran.

Tehran Municipality added that the call is aimed at the commemoration of the martyr's honest and unrivaled efforts in fighting terrorism and defending the country.

General Soleimani was martyred in a targeted assassination attack by US aircraft at Baghdad International Airport early January 3 morning.

The airstrike also martyred Abu Mahdi al-Muhandis, deputy commander of Iraq's Popular Mobilization Forces (PMF), or Hashad al-Shabi. The PMF media arm reported that the two were martyred in an American airstrike that targeted their vehicle on the road to the airport.