TEHRAN (defapress) – Commander of the Aerospace Force of the Islamic Revolution Guards Corps (IRGC) has underlined that the deep-rooted friendship and intimacy between the Army and the IRGC.
News ID: 81299 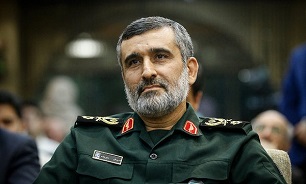 “The friendship, intimacy and communication between the IRGC and the Army are deep-rooted, and nothing can mar such friendship,” Brigadier General Amir Ali Hajizadeh said late Tuesday.

He made the remark on the anniversary of a retaliatory operation launched over the martyrdom of late Deputy Chief of the Iranian Armed Forces General Staff Ali Sayyad Shirazi.

Hajizadeh noted that the formation of elite forces’ artillery was indebted to the assistance of Martyr Sayyad Shirazi, stressing that the revenge operation for his martyrdom was extremely important for the IRGC.

“The assassination of Sayad Shirazi was intolerable for us. After his martyrdom, the mission of revenge against the hypocrites was assigned to the IRGC air force, during which we inflict heavy casualties on them,” he added.

Ali Sayad Shirazi was the chief-of-staff of the Iranian Armed Forces during the eight-year Iran–Iraq war in the 1980s.

He was assassinated in 1999 by the terrorist Mujahedin group (MKO).

The MKO is supported by the Western countries, especially the United States and France.

The terrorist group has killed over 17,000 Iranian citizens since the victory of the Islamic Revolution in different terrorist attacks.