TEHRAN (defapress) – Armenian Parliament Speaker Ararat Mirzoyan has lauded the ‘centuries-oil’ ties with the Islamic Republic of Iran, stressing the need to expand the amicable relations between the two neighbors in different spheres.
News ID: 81327 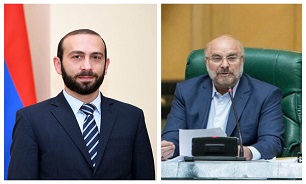 In a letter rendered this week, Mirzoyan congratulated Mohammad Bagher Ghalibaf for his election as the new speaker of the Iranian Parliament, saying, “On behalf of the National Assembly of the Republic of Armenia and personally me, I warmly congratulate you on your election in the high and responsible post of the Speaker of Majlis of the Islamic Republic of Iran and wish you successes in the implementation of your mission.”

“Having great contribution in the spheres of defense, the security of the Islamic Republic of Iran, as well as of the government of Tehran, you will surely have prominent achievements in the post of the Head of the legislative power,” Mirzoyan added.

The Armenian speaker noted that his country “highlights the centuries-old friendly ties and warm relations existing between the two countries, adding, “Today, the general agenda of our countries’ relations involves a wide scope of contacts – from the cultural and inter-religious relations to economic cooperation.”

“I am convinced that during your tenure the inter-parliamentary cooperation between Armenia and Iran will continue its upward path and will give new impetus to the cooperation existing between the two countries for the benefit of our states and for the welfare of the Armenian and Iranian friendly peoples,” he concluded.