TEHRAN (defapress) - US President Donald Trump told Axios in a new interview that his rally in Tulsa, Okla., on Saturday, his first in months, will be "a wild evening."
News ID: 81361 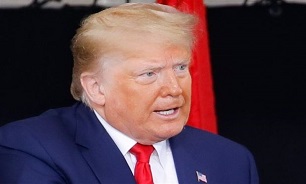 The rally marks the Trump campaign's first big in-person event since the outbreak of the novel coronavirus, and has drawn criticism from public health officials who worry the arena will reach its over 19,000 seat capacity and be a "super spreader" of the disease.

The campaign is planning to give temperature checks and have hand sanitizer and face masks at the door for rallygoers, but when asked by Axios if he will require guests to wear the masks, Trump said: "I recommend people do what they want."

Attendees have also been asked to sign a waiver agreeing not to sue the campaign or the venue in the event of illness or injury.

Trump told Axios the rally is an example of the country returning to normal after the pandemic.

Earlier on Friday, the Oklahoma Supreme Court denied a legal request to require that social distancing be enforced at the rally, after residents filed a suit Tuesday citing fears of an outbreak.

Tulsa Health Department Executive Director Bruce Dart warned against the city hosting the rally as it has seen a spike in cases over the past few weeks.

Thousands are expected to be in the city and lines have already been seen forming outside the BOK Center in downtown Tulsa, The Hill reported.

The city of Tulsa had announced a curfew for Friday and Saturday in order to prevent violent protesting around Trump’s rally, which has been shrouded in controversy since the president initially announced plans last week to hold it in Tulsa on June 19, also known as Juneteenth, a notable African American holiday. But the city reversed course less than a day later and rescinded the curfew, apparently at the request of Trump.