TEHRAN (defapress) – The speaker of Iran’s Parliament deplored slammed the International Atomic Energy Agency for succumbing to the US pressure and passing an anti-Iran resolution, saying that the Islamic Republic will never allow the Agency to violate its legal frameworks.
News ID: 81368 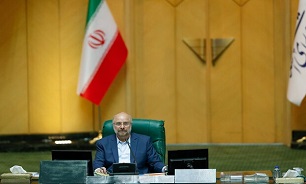 “The past 17 years have shown that Iran has always had the best cooperation with the IAEA in terms of its international regulations and national interests, but often has gained nothing in return but more hostility and ransom demands,” Mohammad Bagher Ghalibaf said during the Parliament’s open session on Sunday.

“But, we will not allow the IAEA to trample [the Islamic Republic’s] rights and violate the legal frameworks,” he said, adding that Tehran will take the appropriate response to the new move.

Noting that such pressures are aimed at bringing Iran to the negotiating table to serve the interests of the US and the Israeli regime, he reiterated Iran’s firm stance and the diplomacy of active resistance, adding that Tehran will never allow Washington and Tel Aviv to realize their goals in the regional and international arenas.

He added that Iran has never been against negotiations with other countries, however, “We believe talks with the US are poisonous and harmful.”

He also rebuked the EU countries that sponsored the anti-Iran resolution at IAEA, saying any future talks with the Europeans will also be held with the ‘maximum distrust'.

On Friday, June 19, the International Atomic Energy Agency’s Board of Governors adopted a resolution drafted by the UK, France and Germany calling on Iran to grant the IAEA access to two locations amid allegations of undeclared nuclear activities.

Iran has said the IAEA Board resolutions are not legally binding, stressing that the information obtained via espionage by the Israeli regime which is now the basis of the Agency’s requests is invalid and unverifiable.

Iran’s ambassador to the Agency said the adoption of the resolution would neither encourage nor coerce Tehran to grant access.

While the three European sponsors of the resolution and JCPOA signatories claim they are still committed to preserving the deal, Tehran says by sponsoring the resolution they have put the future of the JCPOA in jeopardy and have worked to undermined the current level of Iran’s cooperation with the Agency.