TEHRAN (defapress) – A UN rights investigator urged the European Union to consider measures to prevent or punish any Israeli annexation of parts of the occupied West Bank, a few days after over 1,000 European lawmakers made a similar call.
News ID: 81396 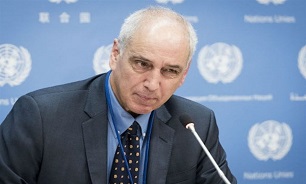 United Nations Secretary-General Antonio Guterres added his voice to the matter on Wednesday, calling on Israel to abandon annexations of settlements in the West Bank, warning this threatened any chance of negotiated peace with the Palestinians who seek statehood in the territory.

Friday's statement by Michael Lynk, UN special rapporteur on human rights in the Palestinian territories, said the EU should back up its warnings against Israeli plans with "a decisive menu of counter-measures."

That was a reference to possible economic, trade or other sanctions. The EU has said annexation must not go unchallenged.

On June 23, European lawmakers called for "commensurate consequences" if Israel went ahead with annexation.

"We have reached a point where resolutions without resolve can no longer contribute to reaching the just and durable peace and human security that Palestinians and Israelis deserve," Lynk said.