Minister Underlines Equal Treatment for All Coronavirus Patients in Iran

TEHRAN (defapress)- Iranian Health Minister Saeed Namaki said that his country has implemented a fair system to treat all patients who have been infected with coronavirus, even the foreign nationals living in Iran.
News ID: 81484 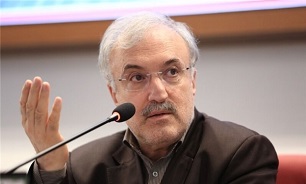 "There has not even been a single patient without a bed at the hospital. No patient was prioritized and unlike some countries, we did not say that the youth should be prioritized. No poor patient was left behind the doors of hospitals and even the Afghans who did not have any resident card were treated for free and this honor was registered for the Islamic Republic that we implemented justice in heath in all parts of the country," Namaki said on Wednesday.

He stressed Iran's effective fight against coronavirus better than the European states and the US, and said the Americans allocated $111bln and the British allocated 23bln pounds to fight the disease while the Iranian health ministry has received less than 30% of the $1bln budget allocated to this end.

Iran on Tuesday reported 200 new coronavirus deaths, the biggest single-day spike in the country since the virus epidemic began.

The Iranian health ministry announced on Tuesday that 2,637 new coronavirus cases have identified in the country during the past 24 hours, adding that 200 patients have passed away since yesterday.

“2,637 new patients infected with COVID-19 have been identified in the country during the past 24 hours and 1,455 patients have been hospitalized,” Iranian Health Ministry Spokeswoman Sima Sadat Lari said, adding, “The total number of the COVID-19 patients reached 245,688.”

“Unfortunately, 200 patients lost their lives in the past 24 hours, increasing the number of the dead to 11,931,” she added.

Sadat Lari expressed pleasure that 207,000 patients have recovered or been discharged from hospitals.

Meanwhile, the spokeswoman expressed concern that 3,270 coronavirus patients are in critical conditions.

Sadat Lari added that 1,846,793 diagnostic tests have been conducted across the country.

Iranian President Hassan Rouhani said last month that over 1,000 medical centers in the country have received necessary equipment to conduct tests on people suspected of infection to coronavirus, and added that Iran ranks first in the Muslim world in scientific achievements.

"Based on a report [by the health ministry], 1,200 centers across the country are ready to take samples and tests from people and 17,500 nursing and health homes are also prepared to provide hygiene and treatment services to people," Rouhani said, addressing a meeting of the national coronavirus campaign headquarters in Tehran.

Also, earlier this month, he said that the country will increase the number of its hospital beds to 8,000 by the end of the current Iranian year (March 19).

He added that 1,500 hospital beds for special cases have also been added to the capacity of the country's medical system since the outbreak of coronavirus in the country, noting that 2 drug production lines are also added every month to the country's pharmaceutical capacity.

The coronavirus COVID-19 is affecting approximately all countries and territories around the world. The virus was first reported in the central Chinese city of Wuhan late last year. It has so far killed more than 546,700 people and infected over 11.9 million others globally.

As the death toll from the virus surges, Iran intensifies its preventive safety measures. Closures of schools and most universities have been extended until further notice.