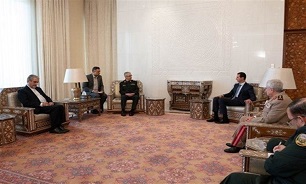 In the meeting held in Damascus on Thursday, President Assad said the recent military agreement signed by Iran and Syria is the result of years of cooperation in fighting against terrorism in the Arab country.

“This agreement reflects the strategic level of relations between Iran and Syria and is the outcome of years of common measures and cooperation in the fight against terrorism in Syria,” Assad said, according to a statement by Syrian presidential office.

Baqeri, for his part, underlined “the importance of Iran’s continued efforts aimed at boosting bilateral ties between the two friendly and brotherly nations in all fields.”

The top Iranian military official also stressed that continued strengthening of bilateral ties is in the interests of Iran and Syria and that he supports it against any attempts to interfere in the domestic affairs of the two countries and damage their independent decision-making.

The accord provides for the expansion of military and security cooperation and the continuation of coordination between the armed forces of the two countries, Press TV reported.

The two sides also underlined the need for the withdrawal of foreign forces which have been "illegally" deployed to Syria in violation of international law and said the forces are the main obstacle to the complete cleansing of armed terrorist groups in some parts of the Arab country.

Iran and Syria have signed different military and defense cooperation over the past years.

The Islamic Republic commenced providing Syria with advisory military assistance after numerous countries, at the head of them the US and its Western and regional allies, began funding and arming militants and terrorists with the aim of deposing the Syrian president’s government.