Iran to continue responding to US rant, rhetoric

TEHRAN (defapress) – Chief of Staff for the Armed Forces of the Islamic Republic of Iran Major General Mohammad Bagheri said that Iran will continue responding to the US rant and rhetoric.
News ID: 81498 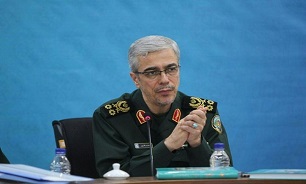 During the meeting which was held between Chief of Staff for the Armed Forces of the Islamic Republic of Iran Major General Mohammad Bagheri and Syrian Defense Minister General Ali Abdullah Ayyoub, the two sides discussed the situation in Syria, stressing the need for the withdrawal of foreign troops who entered the country illegally.

Emphasizing that Iran will strengthen Syria's air defense systems in accordance with strengthening military cooperation between the two countries, Bagheri said that Turkey has been slightly delayed in fulfilling its obligations under the agreements reached in Astana for the withdrawal of terrorist groups from Syria.

Turkey should know that the country's security problems can be resolved through negotiations and understanding with the Syrian side, not through a military presence on Syrian soil, he added.

Bagheri went on to say that the people and countries of the region do not welcome the presence of the United States.

Iran will continue responding to the US rant and rhetoric, he stressed.

The signed agreement raises our will to work together to counter US pressure, he added.

Ali Abdullah Ayyoub, for his part, said that the US would not hesitate if it was able to bring Iran, Syria, and the Resistance to its knees.

Referring to the US sanctions against Syria, he added that Caesar's law fights the Syrians in providing food, medicine, and food for their children, and Syria is trying to deal with the consequences of this law.

He noted that the Israel regime is a US partner in the war against Syria and terrorist groups are part of the Israeli aggression.

The Syrian army will undoubtedly win, he stressed.

Heading an Iranian delegation, Chief of Staff for the Armed Forces of the Islamic Republic of Iran Major General Mohammad Bagheri left Tehran to Damasus to hold talks with senior Syrian officials.

General Mohammad Bagheri also met and held talks with President Bashar al-Assad in Damascus on Thursday. During the meeting, the Syrian President expressed satisfaction with the results of the bilateral meetings between Iranian and Syrian officials and the signing of a memorandum of military and technical cooperation between the two countries.