US continues to smuggle Syrian fuel

TEHRAN (defapress) – The US occupation forces have smuggled another batch of fuel from Syria in continuation of their illegal presence in the country’s oilfields.
News ID: 81508 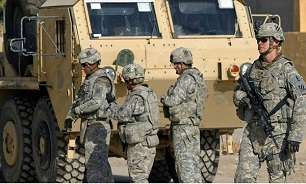 The US occupation forces smuggled a convoy full of fuel to Iraq from the areas it occupies in the Syrian al-Jazeera area to Iraq.

This is while based on another report by SANA on July 1, the US forces smuggled another batch of Syrian fuel by 30 trucks.

In December 2019, the US army deployed armored vehicles, pickups, heavy construction equipment and about 150 rigs to the region despite widespread condemnation of the deployment as being tantamount to robbery.

The deployments came after US President Donald Trump said in October that the US troops would remain in Syria to "secure" the oilfields there. Damascus as well as regional movers and shakers voiced their strong opposition to Trump's decision to seize Syrian oil fields.