TEHRAN (defapress)- Iranian President’s Chief of Staff Mahmoud Vaezi dismissed any interest in having relations with Washington, saying that his country has never trusted the US and Europe and makes decisions based on its own national interests.
News ID: 81520 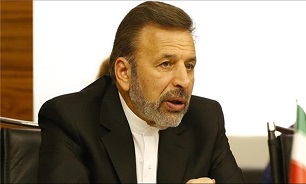 “We have never trusted the US and do not trust Europe either and we make agreements based on our own interests and will remain committed to our undertakings as long as our interests are met and if our interests are not met, the other side will not get the benefits of the agreement either,” Vaezi said in an interview with the state TV on Saturday night.

“We do not aim to establish relations with the US and our interests are not interwoven with the future elections in the US at all,” he added.

Vaezi, meantime, said that incumbent US President Donald Trump’s popularity has decreased, while his rival, Joe Biden, has gained an increase in his popularity rates, adding that many world states which do not agree with Washington’s policies have grown optimistic about the future.

He also blasted the three European states, France, Britain and Germany, for surrendering to the US pressures in dealing with their nuclear deal undertakings, and said, “This shows their weakness.”

In relevant remarks last Wednesday, Iranian President Hassan Rouhani warned of the US and Israel's plots to sow discord between the people and government in Iran, and blasted the European states for defying the contents of the internationally-endorsed nuclear deal.

He also underscored good ties with Europe, but meantime, criticized them for disloyalty to the 2015 nuclear deal.

President Rouhani warned of plots hatched by enemies, spearheaded by the US and Israel, to create gap between the Iranian government and people as well as among the Iranian officials, and said, "The government, for its part, wants brotherly relations with the Judiciary and Parliament."

Tehran said last week that despite the international courts' order against embargoes on the supply of drugs and medical equipment to Iran, the US sanctions and the Europeans' collaboration are still an obstacle to the country's imports of the vital products.

"Although they have said that medicine has not been sanctioned, they have practically closed the path to imports of drugs and humanitarian materials by the country through blocking banking transactions and threatening the pharmaceutical and transit companies," Foreign Ministry Spokesman Seyed Abbas Mousavi said.

He noted that the US is still defying the international court rulling to remove the sanctions on Iran's supply of drugs, adding, "Unfortunately, the wounded war veterans and special-case patients in Iran are deprived of drugs necessary for their survival."

Mousavi also lambasted the European countries and firms which do not allow imports of necessary medicine to Iran under the pretext of the US cruel sanctions.