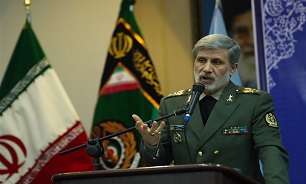 Speaking to Tasnim, the rapporteur of the National Security and Foreign Policy Commission said General Hatami attended a Tuesday session of the parliamentary commission to talk about his ministry’s activities and strategies to boost the country’s defense power.

The minister also pointed to the threats to the Islamic Republic and outlined the strategies to strengthen Iran’s defense and deterrent power for dealing with the threats, Abolfazl Amooei said.

According to the lawmaker, the defense minister also highlighted the plans to promote defense diplomacy and explicated the country’s defense interaction with the neighboring and friendly states, such as China and Russia.

In the parliamentary meeting, Brigadier General Hatami also pointed to Iran’s achievements in the missile industry, naval industries, drones, and warships, and gave a promising report about the country’s defense industries, Amooei added.

The Iranian parliament’s speaker has reaffirmed his commitment to strengthening the Armed Forces, adding, “We hope that with cordial cooperation between the Parliament and the Armed Forces, the country’s defense demands and requirements in the field of ratification of effectual laws would be met.”