TEHRAN (defapress) – An MP informed on Saturday that the Parliament is investigating a new plan to have Iran out of the United Nations' additional protocol.
News ID: 81565 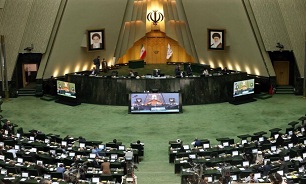 As Tehran's representative Mahmoud Nabavian said that the MPs have prepared and submitted the plan to the presiding board of the Parliament.

"The plan seeks to give the Islamic Republic of Iran an upper hand in IAEA's visits to our nuclear facilities, army bases and some of the Iranian universities," he said, "It will also act as a means against the US sanctions."

The plan has been drawn up in response to the United States and Europe’s excessive demands.

Iran’s parliament issued a statement in June strongly condemning an anti-Iran resolution by the IAEA Board of Governors, asking the government to stop implementing the Additional Protocol, which allows surprise inspections of nuclear sites.

“The Islamic Consultative Assembly strongly condemns resolution of the IAEA Board of Governors which was proposed by three European countries of England, France, and Germany under the pressure of the ruling regime in the United States and the fake Zionist regime. It [the parliament] considers the resolution another example of structural discrimination by the international agency,” the statement read.

“The Islamic Republic has implemented the Additional Protocol voluntarily and not based on its safeguards duties. According to reports of the Agency’s director-general, the Agency has carried out most precise inspections, including 30 surprise inspections annually,” the statement which was signed by 240 MPs added.

The 35-member IAEA board passed the resolution on June 19, demanding access to two old places they claim nuclear work may have been done there.

Nine countries out 35 members to the IAEA board did not vote for the resolution. China and Russia voted against the resolution and Thailand, Mongolia, Niger, South Africa, India, Pakistan and the Republic of Azerbaijani abstained.

Iran has said the IAEA Board resolutions are not legally binding, stressing that the information obtained via espionage by the Israeli regime which is now the basis of the Agency’s requests is invalid and unverifiable. Iran’s ambassador to the Agency said the adoption of the resolution would neither encourage nor coerce Tehran to grant access.