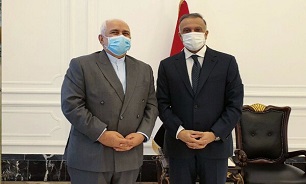 During the meeting, the two sides discussed the development of bilateral relations and ways to develop them.

Zarif also discussed the latest regional and international developments, as well as the situation in Iraq with the Iraqi Prime Minister.

Heading a political delegation, Zarif arraived in Baghdad on Sunday morning to hold separate talks with senior Iraqi officials with the aim of strengthening Iran-Iraq relations.

Earlier, he met and held talks with his Iraq counterpart Fuad Hussein in Baghdad.

Upon arrival in Baghdad on Sunday morning, Zarif told reporters, "I am very happy that after the formation of the Iraqi government, I had the opportunity to visit Baghdad."

He stressed the need for Iraq to play a role in the security of the Persian Gulf region under the new Iraqi government.

Iranian Foreign Minister Mohammad Javad Zarif also said that he is to discuss with Iraqi officials about the regional issues, the US crimes in the region, the martyrdom of Lt. Gen. Soleimani and his companions.